Since 14th of the December, Juventus defeated three teams at home out of the top four of the last season: Lietkabelis, Neptunas Klaipeda and Rytas Vilnius twice. This win helped Juventus to jump up to the fourth place in the standings.

Juventus ran away in the first half (33:17) and even though Lietkabelis made a run 19:3 after the half time, Utena's team stayed in front and kept the win in the pocket.

Gytis Radzevicius led Juventus to a win with 18 points and nine boards.

Rytas used Juventus gift, defeated Neptunas 92:69 and got back to the second place in the standings.

Although, Juventus victory was not such a good thing to Neptunas, as they fell to the fifth place.

Arnas Butkevicius was the top scorer of the game with 19 points, Dovis Bickauskis added 15. 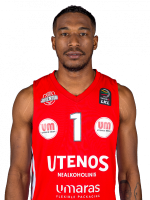