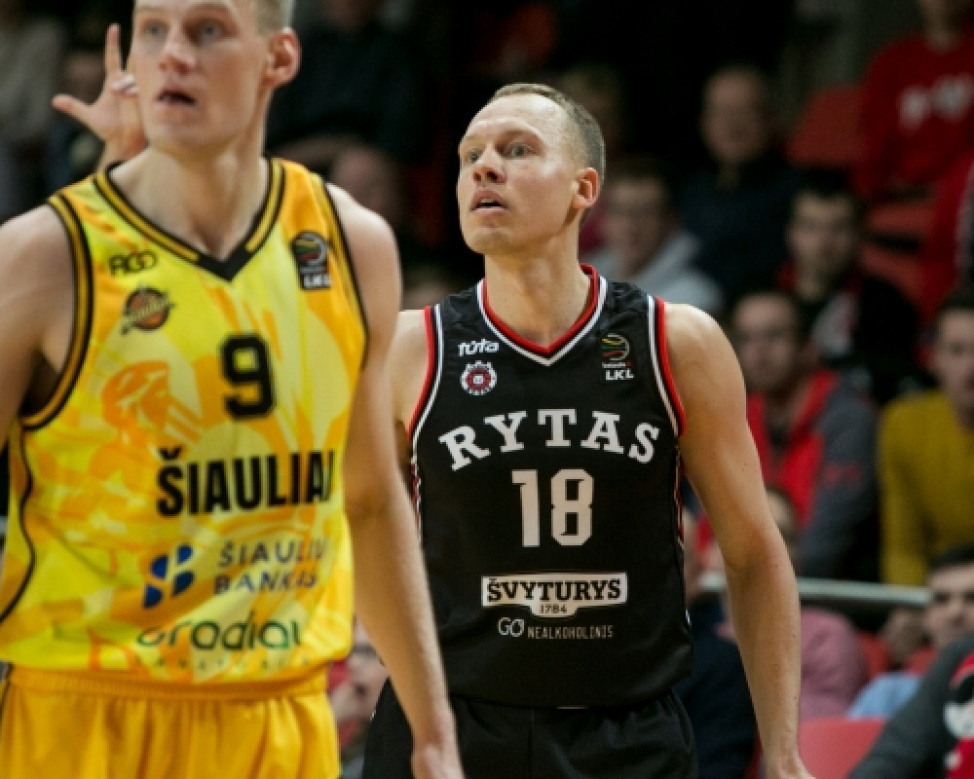 Girdziunas explodes to save Rytas in OT, Dzukija avoid miracle collapse, as Zalgiris brush aside Pasvalys

A career-high for Mindaugas Girdziunas saved Rytas from a shocking defeat against Siauliai, as the Vilnius side managed to keep their heads afloat and earn a 100-96 win in overtime.

The 9th-seeded Siauliai had their noses in front for the lion's share of the fourth quarter, with the margin extending to as much as 7 points halfway through. However, a solo performance from Mindaugas Girdziunas helped Rytas send the game to overtime, where the hosts prevailed.

Girdziunas knocked down 7-of-8 from downtown, en route to a Betsafe-LKL season record of 37 points. Eimantas Bendzius lit it up for 22 points, while Martynas Echodas was a problem in the paint with 18 points and 7 rebounds. Arnas Butkevicius finished the game with 10 points and 5 boards.

Antanas Udras had himself a performance to remember for Siauliai, dropping 20 points, 7 rebounds and 6 assists, while Ignas Vaitkus added 16 points and 7 rebounds. Benas Griciunas had 15, Karolis Lukosiunas amounted for 14 points, while Evaldas Saulys and Arminas Urbutis also entered double-digit scoring, with 14 and 11 points, respectively.

The Juventus and Dzukija matchup once again proved that it never fails to delight, going to overtime for the third   time this season and ending in thrilling fashion. Dzukija only managed to squeek by with an 84-81 OT win, despite having held a 22-point advantage as late as the 24th minute of the game.

Dzukija was led by veteran Arturas Jomantas, who put up an all-around performance of 14 points, 7 rebounds and 6 assists. Paulius Danisevicius and Steponas Babrauskas added 14 points apiece, while Mindaugas Susinskas and Elijah Brown chipped in with a dozen apiece.

Kenneth Gaines was the top-scorer for Juventus with 20 points. Martinas Geben added 19 points and 7 rebounds, while Gytis Radzevicius ended the night with 13 points and 6 boards, while Dovis Bickauskas was a shot away from a double-double, with 8 points and 10 assists.

Zalgiris was the only side to have a  relaxed night, as they coasted to an easy, 88-70 win over Pieno zvaigzdes after jumping ahead early on. The Kaunas side secured their 22nd win of the season to further cement their spot at the top of the league.

Every single player got on the scoreboard for the greens, as Deon Thompson was the scoring leader with 13 points. He also tallied 5 rebounds and 4 blocks. Edgaras Ulanovas had an efficient night, scoring 12 points on just four shots from tie field, while Rokas Jokubaitis dropped 11. Aaron White was dominant with 10 points in 13 minutes of action.

On the other side, it was Yannick Franke with an excellent performance, dropping 20 points. Tomas Lekunas added 13 points to the tally, while newly signed Yancy Gates finished up with 9.