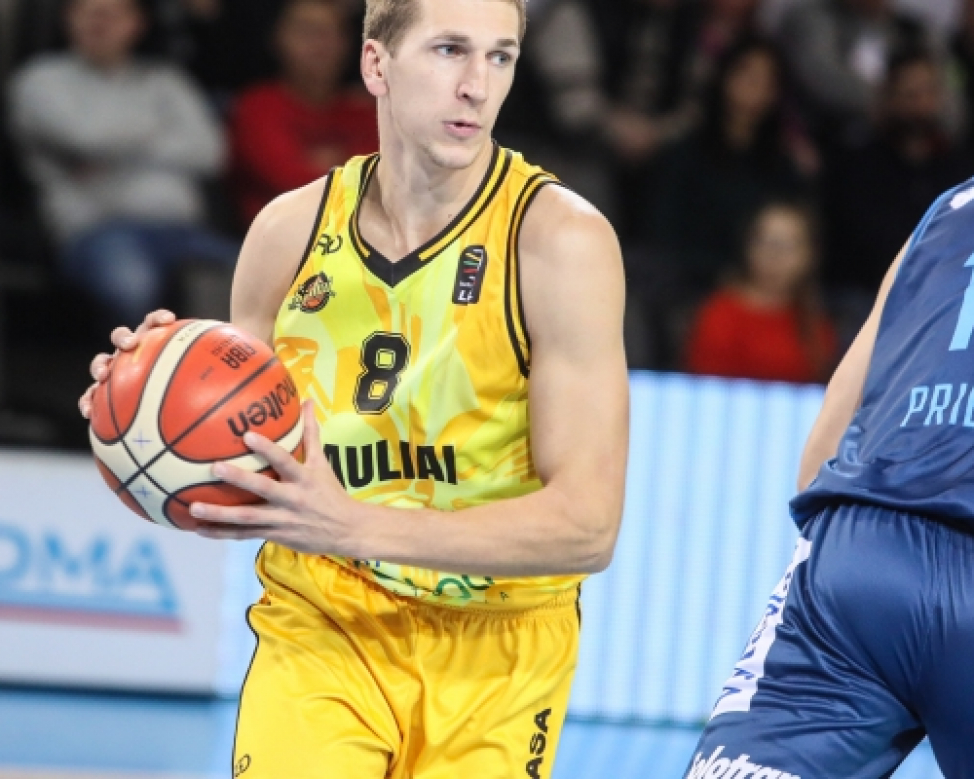 Siauliai and Zalgiris earn victories, as Juventus and Dzukija go to overtime again

Siauliai players could finally leave the court with their heads held high, as they registered their first victory of the Betsafe-LKL season. Having started the game blazing hot, they managed to hold back any attempts to a comeback and defeated Skycop Prienai 88-80.

Siauliai still feed the bottom of the standings with a 1-11 record, whereas Prienai have now dropped three consecutive games but hang on to the 7th position with a 4-8 record.

The visitors were led to victory by a 21-point performance from Evaldas Saulys. Benas Griciunas added 16 to the tally, while Arminas Urbutis had 14 points and 11 rebounds. Karolis Lukosiunas and Kristupas Zemaitis ended up scoring a dozen each.

On the other side, Martynas Gecevicius put up 22 points and 6 assists, while Darjus Lavrinovic had 16 points and 6 boards. Arnas Labuckas added 14 points and 9 rebounds, as Vytenis Lipkevicius added 10.

Meanwhile, Zalgiris continued their successful Betsafe-LKL campaign with a 109-68 victory over Pieno zvaigzdes, making it their highest-scoring game this season.

Despite a busy schedule, the visitors showed impressive energy from the get-go and rose victorious for the eleventh time in a dozen attempts. Derrick Walton Jr. came to work and put up his best performance of the season, scoring game-high 25 points. Leo Westermann added 13 points and 6 rebounds, Edgaras Ulanovas added 11, while Arturas Milaknis and Antanas Kavaliauskas finished up with 10 points apiece.

Belgian guard Yannick Franke put up numbers for Pasvalys, as he scored 18 points and tore down 6 boards. Tomas Lekunas and Karolis Petrukonis had 12 each, while Dagoberto Pena finished up with 11.

The final game of the night went right down to the wire, as Juventus and Dzukija could not settle the score in regulation. After going scoreless in extra time, Dzukija succumbed to a  75-86 loss against the Utena side in front of a home crowd.

The visitors looked strong for the greater part of the game and held a double-digit advantage with just half a quarter to go, but Dzukija bravely fought back and forced overtime. Their luck ran out right there, as they missed every single shot afterwards, losing to an 11-0 run by Juventus.

Alexander Hamilton put up a terrific performance for the victors, filling the stat sheet with 24 points, 9 rebounds and 6 assists. Martinas Geben added 15 points and 10 boards, while Arvydas Siksnius and Marius Runkauskas had 12 apiece. Vaidas Cepukaitis added 10.

Paulius Petrilevicius put up solid numbers for Dzukija, dropping 20 points. Arturas Jomantas, Steponas Babrauskas and Egidijus Dimsa all had 11 points to their name, with the latter also adding 14 rebounds for a double-double performance.