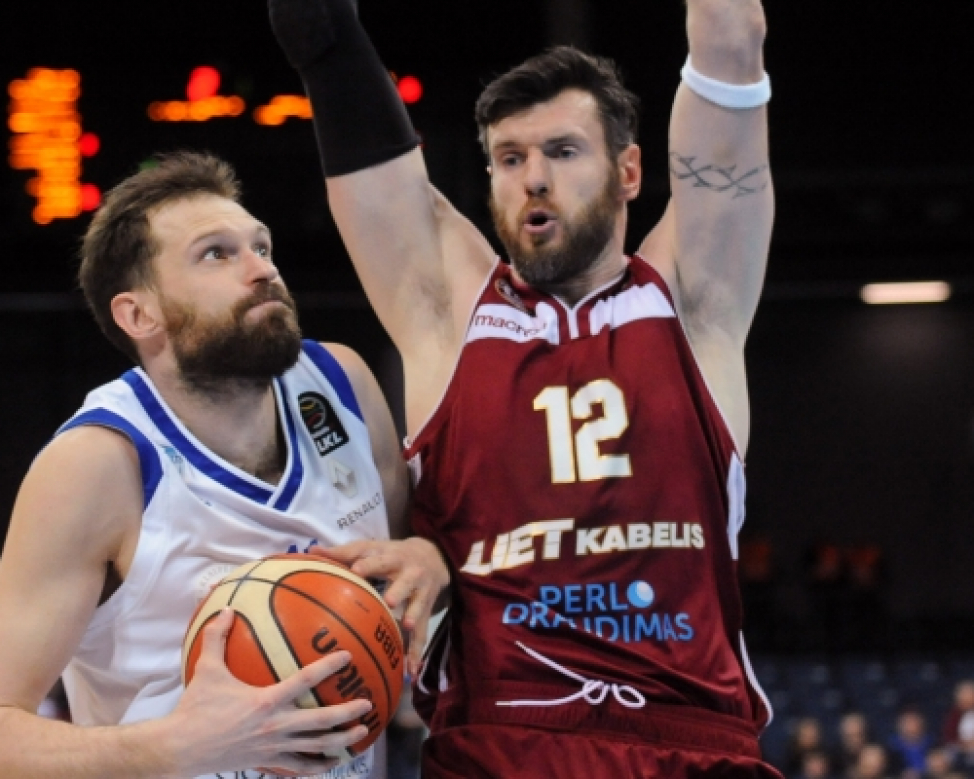 Neptunas were down by 9 points with just 70 seconds until the end of regulation, but managed to turn things around, extend the game to overtime and finish off the spectacular comeback with a 94-89 victory over Lietkabelis.

The visitors from Klaipeda improved their record to 23-9, making it virtually impossible for the fourth-seeded Lietkabelis to catch up with them. The Panevezys side are 19-11 with four games remaining until the end of the regular season.

Edgaras Zelionis had a great night all around, scoring 16 points with 8 rebounds, 2 assists and 2 steals on the side. Tomas Delininkaitis and Renaldas Seibutis added another 16 points apiece including game-tying free-throws at the end of the fourth quarter. Simas Galdikas had 14 points, 7 rebounds and 3 steals, while Jerry Johnson finished the night with 10 points and 7 assists.

Zygimantas Skucas led Lietkabelis in scoring with 17 points, while Gintaras Leonavicius dropped 16. Zanis Peiners and Dominik Mavra finished up with 15 points and 5 assists each, while Darjus Lavrinovic chipped in with 10 points and 7 boards.

Nevezis secured a key victory in the two-horse race for the eighth seed, as they defeated Dzukija 87-78 to overtake them in the Betsafe-LKL standings.

It makes it Nevezis' 10th win in 32 games, while Dzukija dropped to a 9-23 record and are currently ninth, looking at the playoff brackets from the outside.

Aleksandr Zakharov had a season-high 20 points for Nevezis, also adding 5 rebounds to the tally. Lester Medford Jr. had another good game, dropping 14 points, 4 rebounds and 8 assists, while Tadas Sedekerskis finished up with 10 points and 6 boards. Margiris Normantas and Gintautas Matulis ended the game with 9 apiece.

Nikolaos Stylianou led Dzukija in scoring with 16 points, while Mindaugas Susinskas chipped in with 14 points and 6 rebounds. Charles Callison and Alan Wiggins ended up with 11 and 10 points, respectively. Wiggins also had 8 rebounds and 4 assists.

Siauliai were once again making waves playing against another of the top three teams, as they gave Lietuvos rytas a run for their money for more than three quarters, despite losing by double-digits in the end, 75-87.

The Vilnius side improved to 26-6 with hopes of overtaking Zalgiris for the top seed still alive. Siauliai, on the other hand, dropped to 13-19 and are currently sixth.

Rokas Giedraitis was the game's top scorer, as he dropped 19 points and 7 rebounds for Lietuvos Rytas. Ben Madgen had 16 points, while Chris Kramer had 15 points, 9 assists and 4 assists. Mindaugas Girdziunas dropped another 15 points and 6 dimes, while Travis Peterson finished up with 14.

Akeem Wright had 18 points for Siauliai to lead the team in scoring, while Arminas Urbutis contributed 15. Vytautas Sarakauskas came off the bench to score 12, while Donatas Sabeckis came close to a double-double with 9 points and 9 assists. The defense did a good job on Laurynas Birutis, as he was limited to 8 points and 7 rebounds, his worst performance since the start of December.