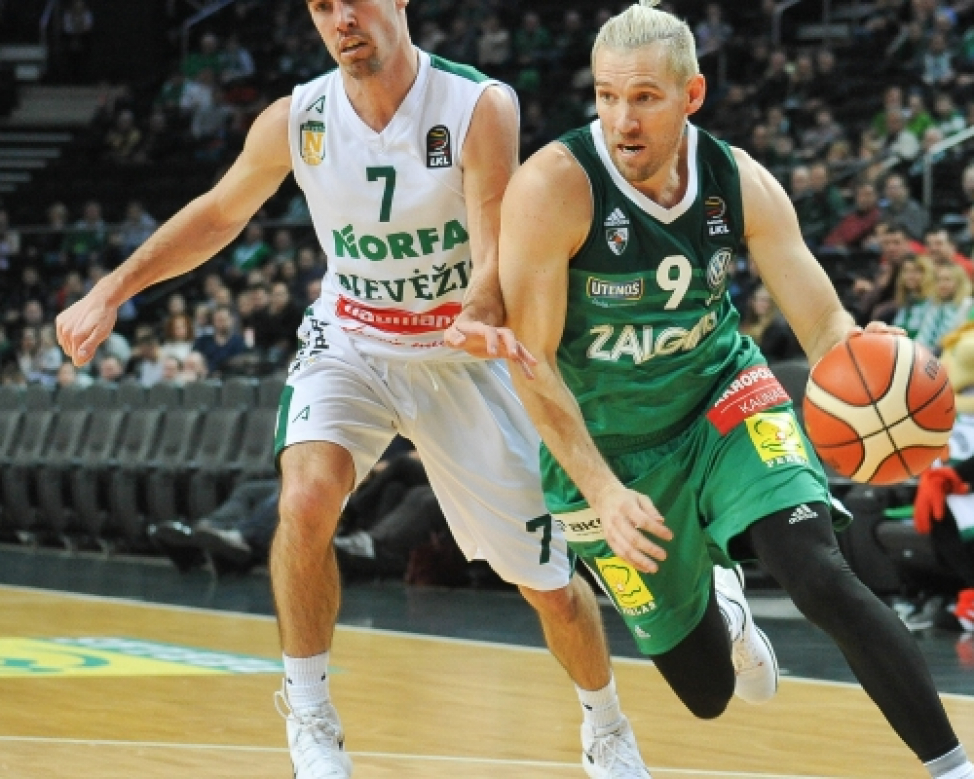 Beno Udrih turned in a solid all-around performance in his Betsafe LKL debut, as the league-leading Zalgiris maintained the top spot in the standings with a convincing 94-68 victory against Nevezis on Sunday.

The 35-year-old Slovenian guard scored 18 points and dished out 7 assists in 23 minutes of playing time off the bench, as the defending champions from Kaunas moved to a 16-2 mark.

Nevezis did well to keep the gap in single figures in the first half, but a 26-10 third quarter by Zalgiris allowed the hosts to break away to a 25-point lead before the last period, answering all questions well before the final buzzer.

A stellar outing by Gytis Masiulis earned him a 19-point and 11-rebound double-double, while the trio of Aaron White, Axel Toupane and Antanas Kavaliauskas chipped in with 10 points apiece.

Ukrainian center Vladyslav Koreniuk collected 20 points and 9 rebounds for Nevezis, with Gabrielius Maldunas standing as the only other player in double figures with 11 points and 6 boards to his name.

It was the fourth consecutive loss for Nevezis, who are in last place with a 4-14 record after winning just once in their last 11 games in the Betsafe LKL.

Elsewhere, Juventus continued their strong stretch of play with a 93-81 triumph against Pieno Zvaigzdes in Pasvalys behind a 25-point contribution from forward Arvydas Siksnius, who equaled his career-best mark in scoring.

A pair of three-pointers by the Juventus captain helped the Utena club seal the deal in the fourth quarter after the opponents had got within striking distance in the final frame.

Anthony Ireland also played a big role in the win with 24 points, 5 rebounds and 8 assists, while Mindaugas Kupsas added 16 points and 7 boards.

For Pieno Zvaigzdes, Vyacheslav Bobrov accumulated a double-double of 17 points and 10 rebounds, while Arturs Ausejs and Osvaldas Olisevicius collected 16 points apiece after hitting four triples each.

Following the win, Juventus moved into fifth place with a 7-11 record, leapfrogging Pieno Zvaigzdes who dropped to 6-12.